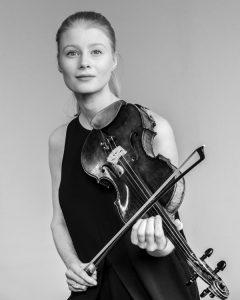 Concerts have brought her all over Europe as well as to Japan and  Singapore (Concertgebouw, Wigmore Hall, Franz Liszt Academy). Cosima has great interest in modern and contemporary composers and as such has recently been performing violin concertos by Vasks and Gubaidulina. Upcoming are participations at Heidelberger Frühling and the Festival de Pâques. Additionally, she enjoys playing chamber music and playing alongside her brother, violist Sào Soulez Larivière.

Cosima has participated in master-classes with, among others, Salvatore Accardo, Ana Chumachenko, Mihaela Martin and Leonidas Kavakos.

She became a fellow at the Tanglewood Music Centre in 2016. In 2018, she took part in ‘Chamber Music Connects the World’ at the Kronberg Academy (Gidon Kremer, Steven Isserlis, Christina Tetzlaff) and was in the same year invited to the Verbier Festival Academy where she was given the APCAV Award. In 2019 she became a fellow at Ravinia’s Steans Music Institute.

She is a recipient of the ESU Music Scholarship, UK (2015), the Live Music Now Hannover e.V. Scholarship, Germany (2015-2019), the Deutschland Stipendium (2016) and the Studienstiftung des deutschen Volkes (2017-). Since 2018 she is a fellow at the Young Artists Foundation GmbH, Germany. As of 2019 Cosima was admitted to the Academia Walter Stauffer in Italy (Salvatore Accardo).

Cosima Soulez Larivière was born in Paris and from a young age was taught by Igor Volochine. When she was 8 years old, she was awarded a scholarship to study at the Yehudi Menuhin School in England where she became a pupil of Natasha Boyarsky. Currently, she is studying at the Musik Hochschule in Hanover with Prof. Krzysztof Wegrzyn.

She plays on a G. Grancino 1675 kindly on loan to her by the Deutsche Stiftung Musikleben.